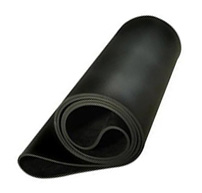 The Conveyor belt is set to be defined as an endless chain or belt that carries an object over a short distance. In the technical dictionary, the conveyor acts as a carrying medium in a bigger system known as the belt conveyor system.

The conveyor belt usually consists of 2 layers while a third layer of carcass in recommended for many processes. The three layers of a conveyor belt are the top cover, the carcass and the bottom cover.

Nylon, steel, Polyester, cotton and aramid are the common materials used to make the carcass layer. The carcass provides shape and strength in the linear direction. The carcass made out of any of the named material is woven in between the top and bottom cover. Resistance and elasticity of the belt comes from warp and the werf (longitudinal and latitudinal thread in a roll during weaving).

The weft is responsible for the resistance against cuts, tears and impacts while maintaining a high level of flexibility.

Picking the right conveyor belt for a conveyor system designed to perform a task is essential. A mismatch may result in damage to the product being transported as well as the complete system. This will be an expensive failure if the situation arises.

Key points to consider a conveying belt includes the size and the weight distribution of the object that is to be transported.

Impact on loading is another field to be considered. How the product is loaded on the conveyor system will determine initial weight distribution.

The orientation of the object will also play a role. If the orientation changes during transportation, the belt should be chosen that can cope with the changes.

Speed and inclination are another two factors that require a piece of thoughtfulness. High speed creates heat while an inclination changes the weight distribution of the object. To facilitate both of these variables, the material for the conveyor belt chosen must be resistant to heat and have the strength to bear the load.