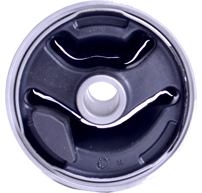 The bushing in vehicles is an anti vibration component between two parts or members. It serves the purpose of damping the transmitted energy due to various movements of the members. Suspension constitutes to the major application of bushing.

The bushings are often cylindrical in shape. The round smooth shape makes it easy to slide and fit in spaces where bushing application is required. It involves an internal crush tube in the middle which allows it to resist plastic deformation in case of stress applied by the members at both ends.

Internal combustion engines are prone to vibrations through the rotating crank shaft. The longer the crankshaft of the engine, the more it will be subjected to torsion. Rubber bushing is required to counter this issue. A thick rubber disc, a bonded steel plate and a floating iron weight constitute the bushing of the crank shaft.

The anti roll bar is the suspension member that makes use of bushing. The anti roll bar connects both the front wheel through short lever arms which are linked by a torsion spring. During fast cornering and an unstable road, the roll bar prevents the body roll of the vehicle. The bushing makes sure that vibrations do not hinder the connections and the system works smoothly.

Manual transmission vehicles require an additional bushing over an automatic one. The gear stick connected to the gear assembly requires bushing for fluid shifting of gears.

Shock absorbing hydraulic devices commonly known as the shock absorbers also operate on the principles of bushing. The device absorbs kinetic energy and converts it into heat. The heat is dissipated to the environment.

Advantages and Disadvantages of Bushing:

A major advantage of using bushing between members is the reduction of noise. It smoothens the movements. As the parts are not in direct contact, the major noise production of metal against metal is extinguished.

Bushing creates feasibility for both the driver of the car and the components of the car. It still has it’s fair share of limitations. Bushings made from rubber can deteriorate if the internal temperature in the vehicle becomes too high or if the temperature falls rapidly due to cold weather. The presence of oil can also influence the performance of the bushing.

Rubber is the popular bushing material used in vehicles. It comes with another disadvantage which owes to it’s flexibility property. Camber, caster and toe changes in the vehicle will affect the vehicle handling under excessive loads. The counter to this problem is replacing the rubber bushing with a rigid material but every material comes with it’s own drawback.